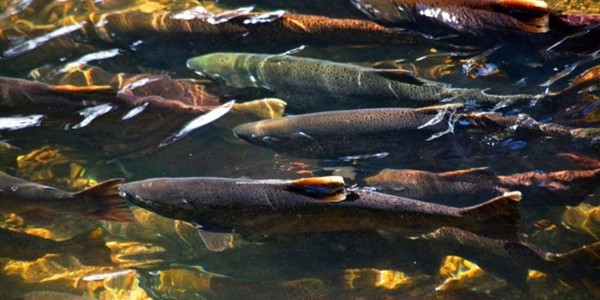 Lake Michigan makes for an exciting destination for anglers year-round given the myriad of species that call this body of water home. With the name derived from the Ojibwe word that means “great water,” Lake Michigan lives up to that moniker with its water volume of 1,180 cubic miles. Given all that space, the aquatic life here is flourishing! Countless species of fish thrive in Lake Michigan, including some rare finds – continue reading to learn more!

This species of fish is named for their home range in the Northern Atlantic Ocean and were introduced into the Great Lakes in the 60s. Among the largest salmon species in the world, Atlantic salmon are an average of 71 to 76 centimeters in length at adult age and weigh in between 3.6 and 5.4 kilograms. They are known to jump, fight, and make a fast escape when hooked, which makes them a thrilling challenge for anglers. Atlantic salmon may be found jumping or finning on the surface of the water!

Both largemouth and smallmouth bass can be found in Lake Michigan in high numbers. Largemouth bass prefer shallow bodies of water while their smallmouth counterparts prefer rivers and rocky habitats, both of which are plentiful in Lake Michigan. They are all popular with anglers due to their fighting ability and tendency to jump when struggling for freedom. Bass like to come out from their shelters when it is cloudy with little to no sun, which is the best time to cast a line for them.

Known as kings for their strength and difficulty being caught, chinook salmon have dominated other salmon species within the Great Lakes since the 1870s. Many anglers hunt for chinook for their meat rather than their size. They are often caught in deeper waters so be sure to cast your lure somewhere deep enough for them to spot. With their predatory nature, they will strike at the lure and allow you to try luring one in.

These fish are found in nearly every body of water around Lake Michigan, but lakes specifically are especially rich in sunfish. Bluegills are a type of sunfish that is extremely abundant and most often targeted by anglers, but there are plenty of other types too. Most days, sunfish prefer shallow waters so be sure to target those areas with a bait and rig for success.

Though difficult to spot in open waters, white bass are easy fish to catch due to their tendency to group together. They love to roam as a unit so all you have to do is spot a group and cast a line! White bass are known to be biters but they are easily frightened, so it is necessary to exercise a degree of caution when hunting. They like to feed in groups near shallow waters during early mornings or late evenings, making these the ideal circumstances to go fishing for a white bass.

These are only a few of the incredible fish species you can find right here in Lake Michigan. There are so many open waters to explore and so many more fish to catch – all you need is the perfect boat! Luckily for you, Great Lakes Yacht Sales has an incredible selection of fishing boats from brands like Smoker Craft and Starweld. For all your boating needs, we are Milwaukee’s leading boat dealer, and our professional team will be more than happy to answer any of your questions.